Top Page > About us > Information for Investors > For Individual Investors

Both the online and offline domains of the payment processing business trended strongly in FY2021, driven by new service launches to global major companies as well as the expansion in transaction volume and value, acquisition of new merchants, and revenue growth of existing merchants.
In financial-related services, Early Payment Service grew steadily as it supports cash flow improvement at merchants. However, for those services which entail credit risks, appropriate response was taken against rising credit risks. As a result of the above, we recorded 16 consecutive years of revenue and profit growth since listing on the TSE Mothers market in 2005.

With regard to capital policy, shareholders’ equity increased from the full conversion to common stock of the Euro Yen Convertible Bond with Stock Acquisition Rights issued in 2018, in June 2021, two years ahead of schedule. A new bond was issued under a similar scheme at the same time to procure funds for future growth from expansion of the Money Service Business and executing on M&A strategy.
We express our deepest gratitude for the warm support extended to us by stakeholders that enabled these achievements. 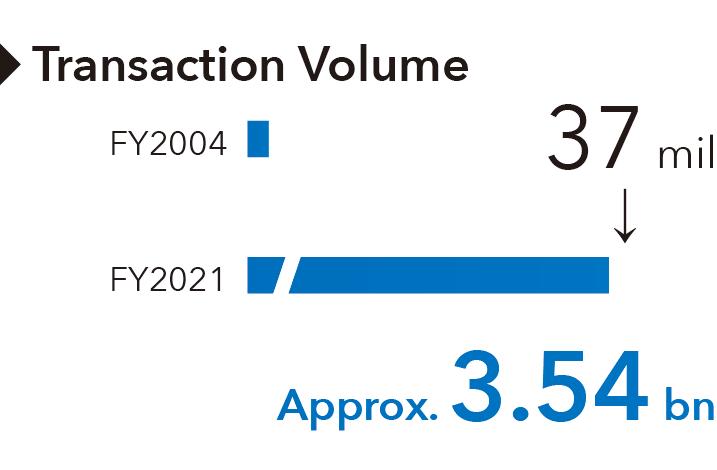 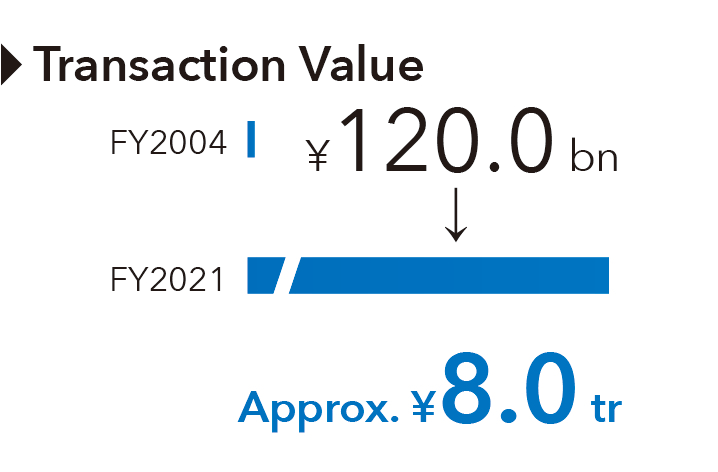 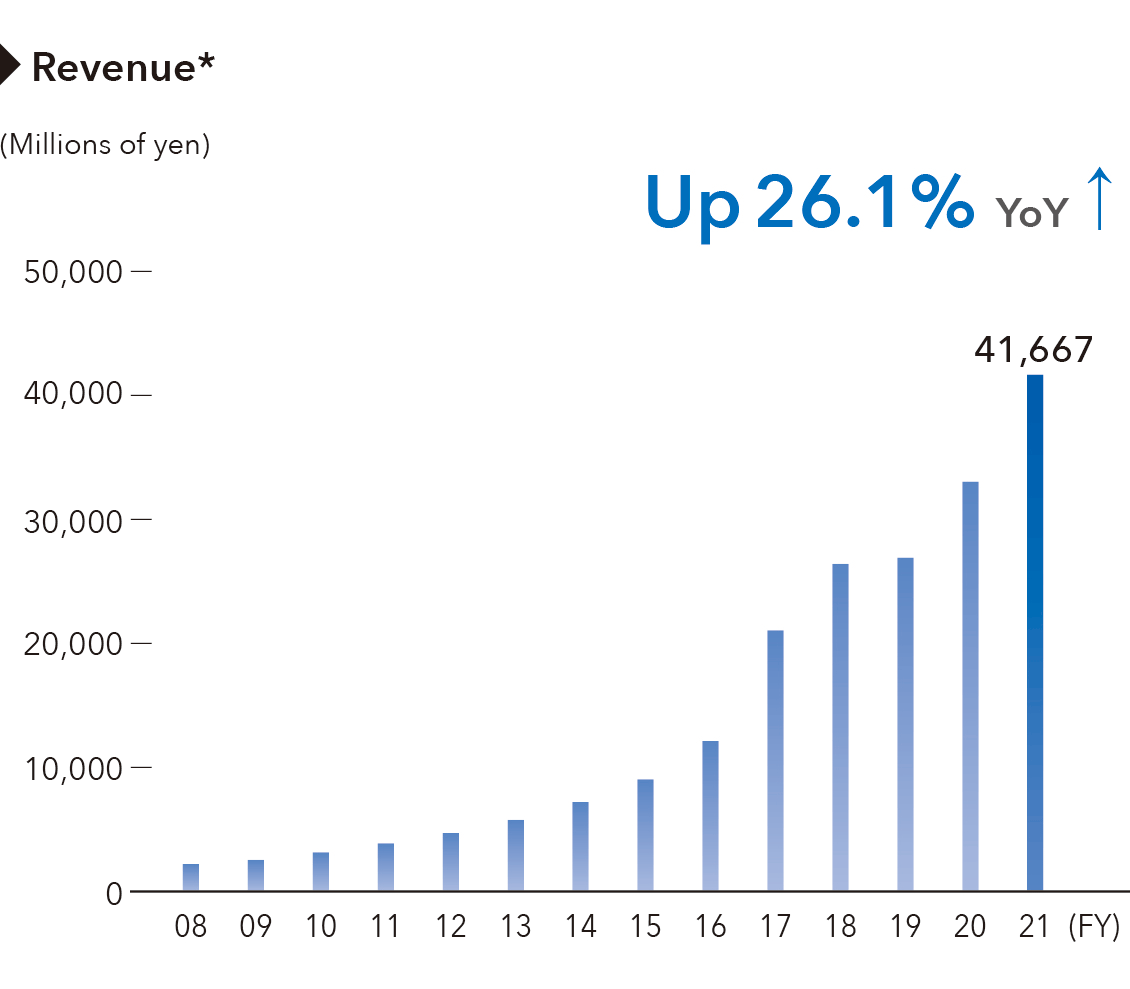 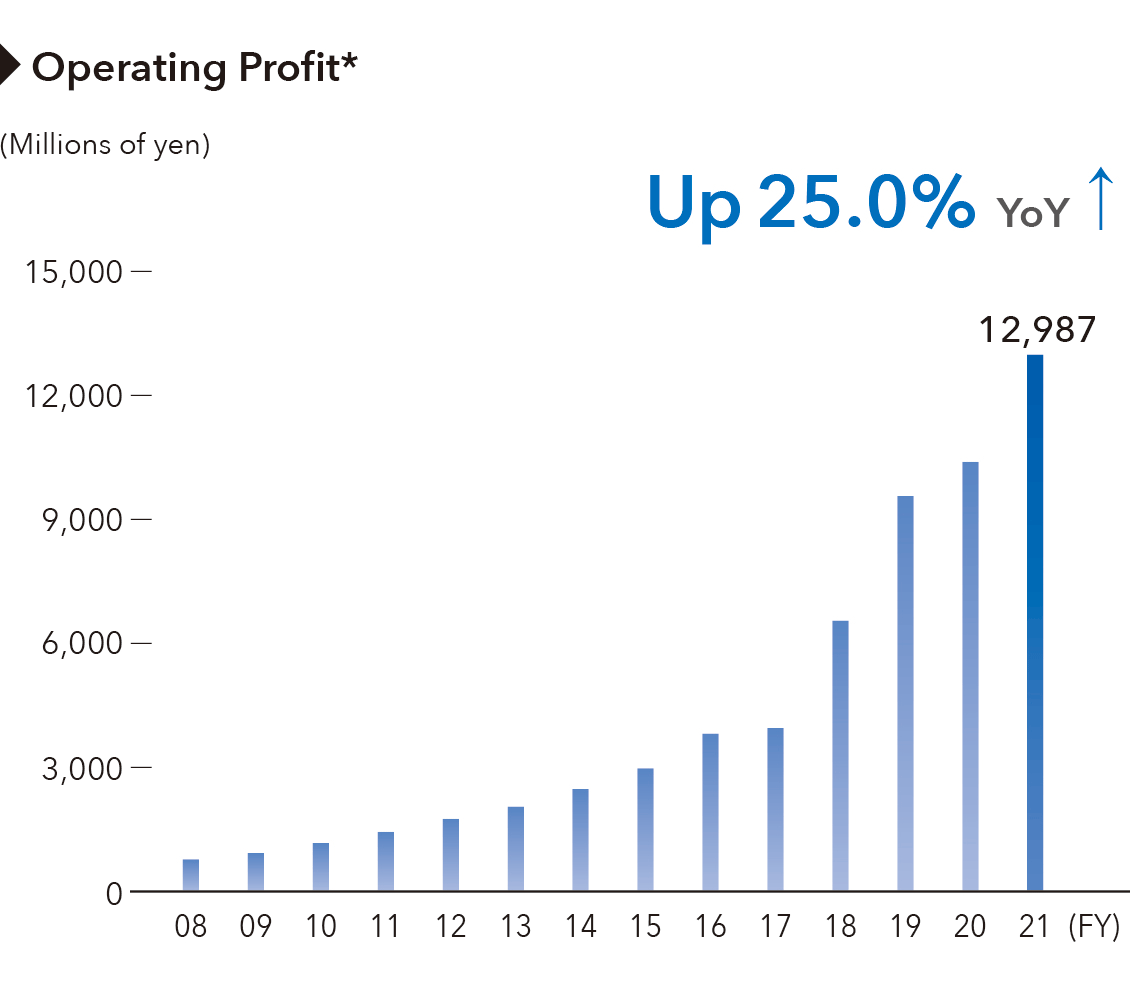 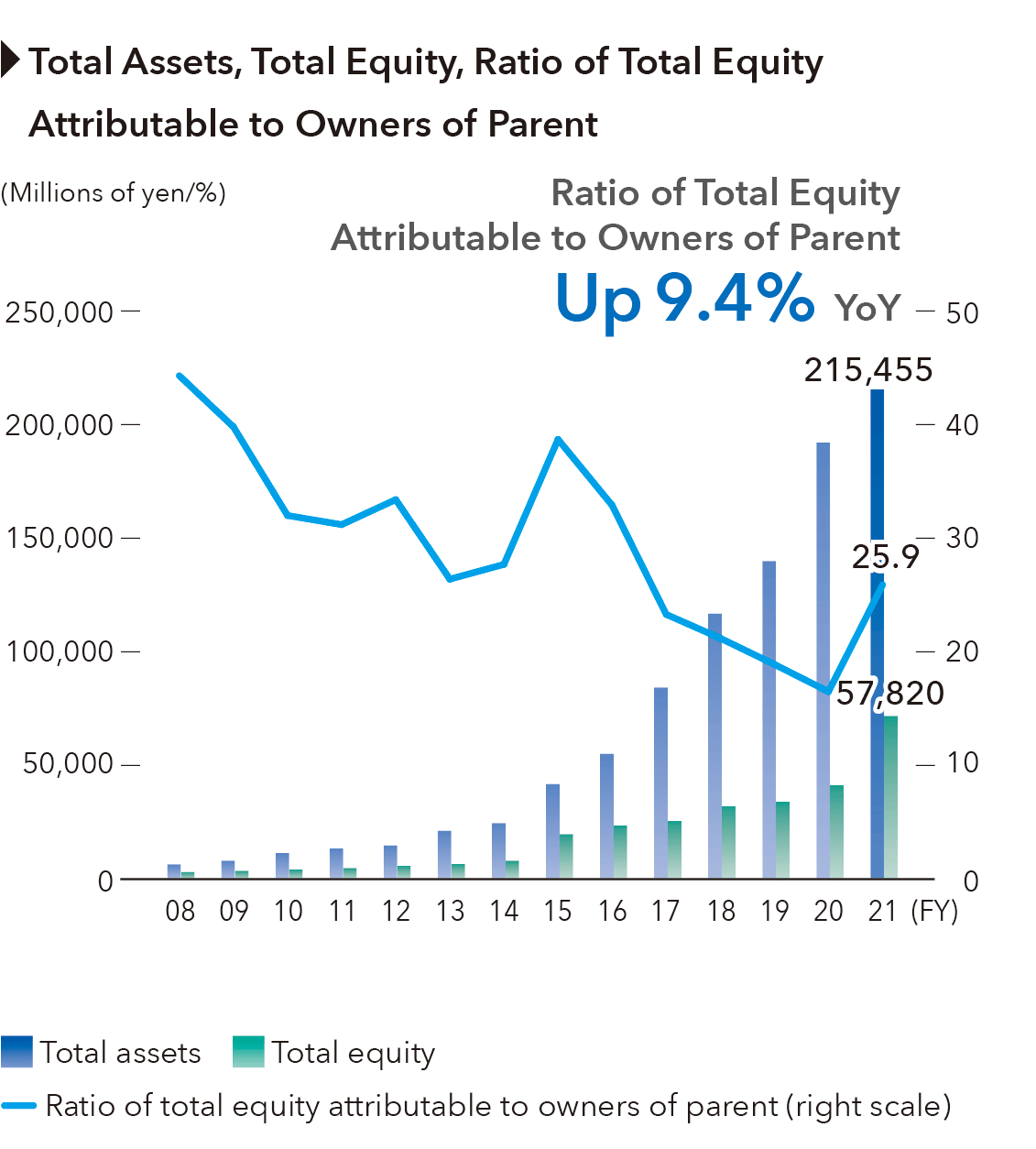 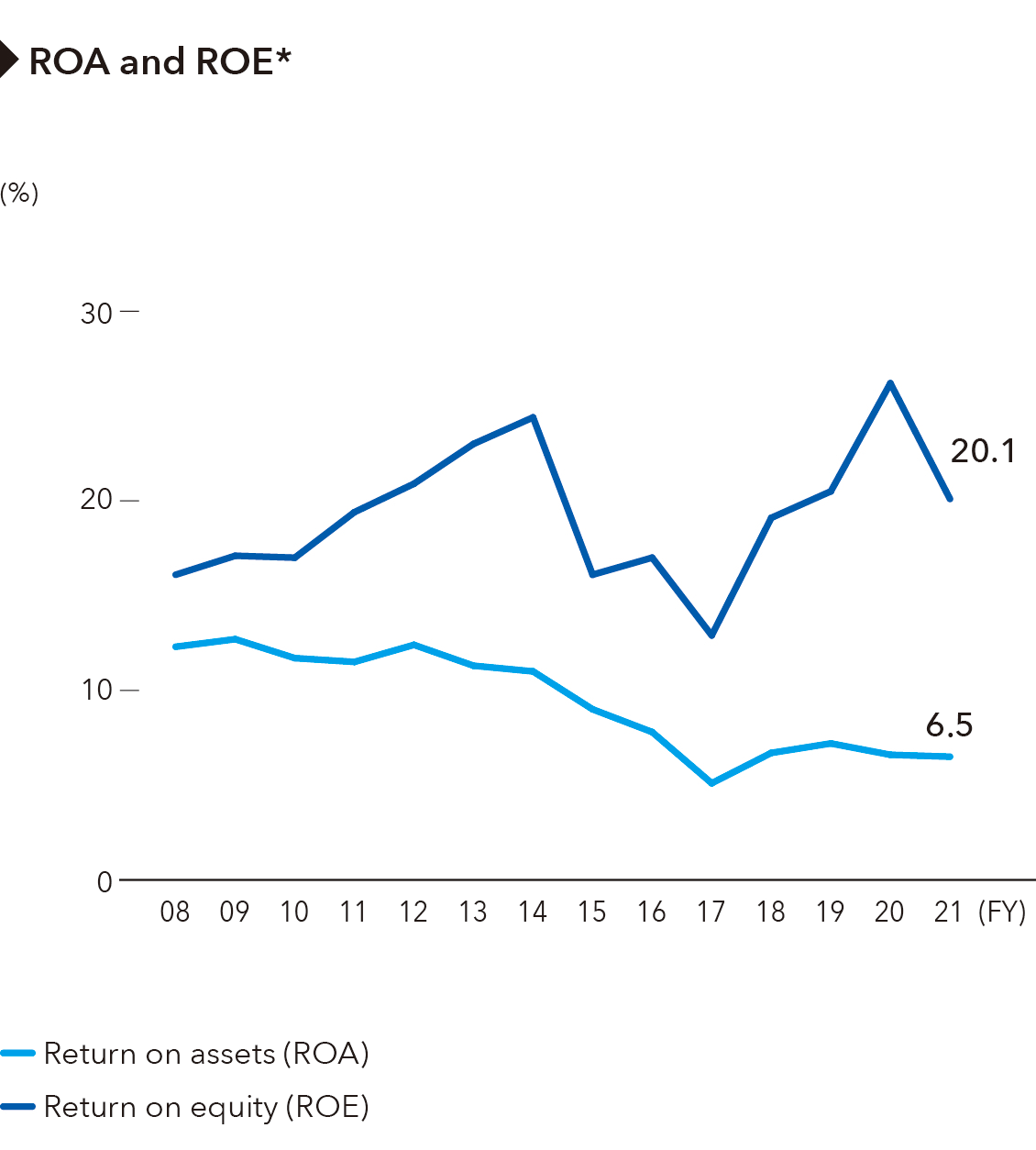 Continuing to secure the necessary internal reserves to strengthen corporate capability and for future business expansion as well as continuing to stably return profits to shareholders are material issues for the management.Dividends for this fiscal year have been raised to ¥59 per share, an increase of ¥7 per share compared to FY2020, in light of the enhancing shareholder returns and as profits exceeded the Company’s forecasts.

* Due to the deconsolidation of Macro Kiosk Berhad in FY2020, its business has been reclassified as a discontinued operation. As a result, the figures for revenue and operating profit only represent the amounts for continuing operations. The figures for FY2019 have been similarly restated.
* Titles of charts are based on IFRS standards. Figures before FY2017 are based on J-GAAP, and assets refers to total assets, shareholders’ equity refers to net assets, total equity attributable to owners of parent to total assets refers to equity ratio, return on assets using profit before income taxes (ROA) refers to ratio of ordinary income to total assets, and return on equity using profit attributable to owners of parent (ROE) refers to return on equity.
* IFRS standards have been adopted from FY2018, and the figures for FY2017 are restated on the same basis.

A merchant makes a contract with each credit card company separately. This merchant pays us a system fee (initial, stock, fee). Every credit company pays the proceeds directly to the merchant. 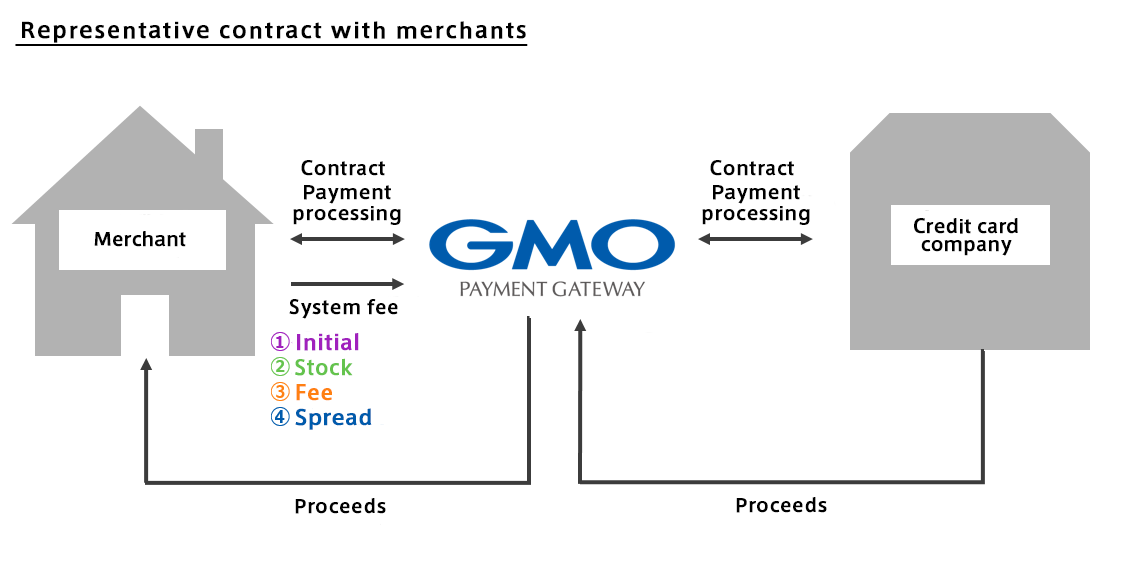 4 types of revenue depending on the merchant.
The construction of the revenue model is both stable and growing: it represents the model that is composed of a running transaction revenue on the top of a stable stock revenue.

The services of GMO Payment Gateway are PCI DSS 3.2.1 compliant.

All business premises of GMO Payment Gateway have acquired ISO/IEC.